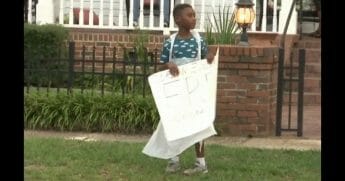 Many people spend days leading up to their birthday finalizing their celebratory plans. Whether they’re planning on an all-out party or just dinner with family, they’re usually focused on enjoying themselves and being the center of attention.

This wasn’t the case for 6-year-old Jermaine Bell of Allendale, South Carolina.

To be sure, Bell had big plans for his birthday — which is on Sept. 8. He dreamt of a trip to Disney World, and he’d been scrimping and saving to help fund the once-in-a-lifetime trip.

According to CNN, he was especially excited to visit “Animal Kingdom and see lots of lions and have a Lion King party.”

But as Hurricane Dorian got closer and closer, forcing evacuations, Bell couldn’t help but be moved by the evacuees’ plight and decided to do something about it.

Using his Disney World fund, Bell bought hot dogs and all the fixings, water bottles and bags of chips, and stood on the side of Highway 125 in Allendale on Labor Day to hand them out to people on their way to safety.

“Dorian Evacuees: FREE Hot Dogs & Water” his handmade sign read. Donning a plastic apron and wearing a smile, the young man handed out around 100 hot dogs on the first day alone, according to WJBF.

His reason for helping was simple and kind.

“The people that are traveling to go to other places, I wanted them to have some food to eat, so they can enjoy the ride to the place that they’re going to stay at,” he told WTTG.

“I wanted to be generous and live to give,” he said during an interview with WTTG.

But the care didn’t stop with food, as the young man was also invested in the evacuees’ spiritual state. He offered to pray for the people who came through, too.

“He actually even prayed for a family while they were here in reference to their house being okay when they got back, so that was really tear dropping,” said Aretha Grant, Jermaine’s grandmother.

“Knowing that they couldn’t take everything and we were able to have a house, so that’s the blessed part that he should be thankful for.”

“I am very proud,” she told CNN. “We knew Jermaine was very special, but we didn’t know he was special in this way to be such a giver like this.”

We are virtual freelance legal assistants. We have over 180 documents posted online at www.scribd.com/nootkabearmcdonald We enjoy being together, and sharing our lives with our two Kugsha. They are very large, and love to make us laugh, loads of fun!

Just a Farmer & Farmher, inspiring others to live the homesteading dream!

For Dog Lovers Only

Where we keep you up to date with the latest information in the 2A community!

Rehabilitation is an attitude.

Where Deplorables Hang Out

Pacific Wild is a conservation voice dedicated to ensuring that the Great Bear Rainforest remains one of the planet’s greatest cradles of biodiversity.

Save the Gray Wolves
Red Wolves

an animal's eyes can speak a great language

by not killing them.

you reap what sow